The New York (by way of Brazil) four-piece The Velvicks recently released their outstanding debut EP Run.  I recently emailed with guitarist/vocalist Vick Nader about the new EP, going back and forth from Brazil and Miami in his youth, the future plans for the band and more. 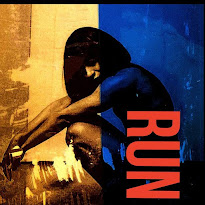 Can you give me a bit of a band history?
It’s 2017 and Vinny (guitar), Ed (drums), Apoena (bass) and myself, four dudes with different backgrounds sharing similar appreciation for rock music find themselves in a perfect condition to start a band: time to spare, a home studio in the basement and rock n roll parties on daily basis. Hanging out at Ed’s was the key factor which allowed us to come together as a band. At one of those gatherings we were spotted by a booking agent who dropped a card and a few months later we debuted at Irving Plaza.

Can you tell me about the “Monroe Mansion”?

Not without jeopardizing my immigration status (haha). Jokes aside Monroe Mansion was the birthplace of the band. It was a very special place in a very special time of our lives. It even inspired us to write a song that sums up what it meant to us. It says:

-Babe, take me down

-To the Monroe Mansion

-To release my tension

-With my fellow pagans

How does your songwriting process tend to work?

I usually have a seed that comes followed by lyrics. I share it with the band and we all build the tune from the ground up. We discuss structure, arrangement and production together till we stand in a common ground where we all feel happy about it. It sounds more complicated than it really is or they make it simpler than it actually is. The point is we get there very quickly haha. It’s a group of very talented guys who all have years of devotion to music. In the end of the day it’s Rock n Roll. No one here is trying to reinvent the wheel.

All of you are from Brazil, but I know you went back and forth from Brazil to Miami throughout your youth.  Do you think that traveling had any impact on your music?

100%. Music was what shielded me from the harsh adaptation between two very different worlds. A small rural town in the middle of Brazil and Miami, a city hard to define let alone for a 7 y.o. On the other hand I was exposed to music that was years ahead of my local friends on both sides of the map, internet wasn’t a thing yet in the early 90’s.

I listened to some of your older songs and the songs on the EP are a lot heavier and more aggressive than the ones I heard. Was that a conscious change or just a natural evolution?

We did choose to come out to the world as full on rock band. Even those quieter songs, on stage were getting more distorted and more aggressive. So to be fair with your train of thought, I’d say it was a natural evolution that paved our way to how the EP sounds. Regardless of the rock n roll esthetics of ‘Run’, our musical range is pretty vast and we plan to share that side of us with our fans in the near future.

You spent several years playing shows all over the country before releasing your EP.  Did all those live shows have an impact on how the songs finally turned out?

Super yes haha. There were long periods of time that we were no longer rehearsing. We had so many shows one after the other that we started messing up with the songs on stage to fuck with each other. We developed an internal vocal signal that regroups us a couple bars before we transition from instrumental/solo parts to the next section of the song, allowing us to jam and extend a song to whatever length we judged adequate at the time. We matured the songs on stage before recording them. That made us a very strong live act.

To me the explosive sound of “Jones" kind of stands out from the other songs, especially when it slows down with the fuzzed out guitars (which I love).  Can you tell me about that? 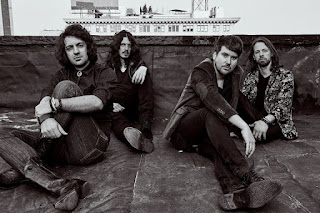 Jones’ is fearless. A ballsy song that was never meant to please anyone. The guitars are visceral while the kick drum simulates a heart beat. One of the band’s favorite tune and there is rarely a live show that we don't add it to the setlist. Lyric wise it is our own version of "Shine On You Crazy Diamond". A little more aggressive, less dramatic and with alcohol breath we usually. It’s about a person who lost it, who didn’t manage to hold it together but nevertheless had an inspiring and ambitious soul.

I love that you wrote the song “LDNYC” as a tribute to the first responders.  Can you tell me a little more about that?

While us artists are the first layer of the industry to discontinue working at a pandemic outbreak, the first responders become instantly the core piece of the puzzle to not only treat the ones infected but to also help secure the others from getting sick. Where I come from whoever walks towards the beast when everyone else is running towards the other direction deserves a homage. When I sing ‘Spring hasn’t sprung to me’ I say it from the prospective of a first responder who isn’t being able to see the Sun in days due to work. Risking his/her life on top of it.

You turned down four labels and self-released the EP instead.  Why did you decide not to go that route?

I didn’t think they would have injected the amount of energy necessary to push the band to match up with the push we were doing on our end. It’s our first album, we have no history therefore no bargain to negotiate with a record label. We believe we can generate a buzz ourselves with this first album and see where it goes before kicking off owning only 50% of our masters. We would’ve toured extensively through North and South America in 2020. Our world domination plan (haha) wasn’t very far off if it wasn’t for covid.

I read something that mentioned the song “LA” and it said it was going to be on the EP.  What happened there?

LA is one of our strongest tunes and fans favorite, like “Old Mistakes”. We decided to postpone those releases for the full length album. We were certain about releasing a 4 songs EP but then ‘LDNYC’ was made weeks before the album release. The timing and relevance of this song spoke louder than our 4 songs EP plan. In order to level it with the other tunes was challenging cause ‘LDNYC’ was produced, recorded, mix and mastered remotely and from home, but Ed managed to reach a very similar texture and successfully converged it to the unity of the EP.

I saw something that mentioned an EP you were working on called “Red Heads”.  Was that ever put together and just never released or did it never get that far?

It was an alternative name for ‘Run’ that got too far noticed out there before properly addressed and modified.

As long as you’ve been together I would imagine you have a pretty decent catalogue of songs built up.  Any reason to limit your debut to a 5 song EP and do you think we will be getting more soon?

Yes sir, we do have over 2 full lengths mastered and ready to put out. I prophetically hinted why we released 5 songs when you asked me about the record deals. We believe that releasing an EP as an independent artist first is a good step towards building the team and the brand of self sustained entities. That gives us a better position if/when we get approached again by any music executive.

I know you had alot of shows scheduled around the EP being released.  What has the band been doing during the pandemic since you weren’t able to play live?

We actually have managed to stay pretty busy in order to stay mentally healthy. We recorded 4 originals and a cover song, we recorded 2 music videos and working on a third one, we collaborated with Leesta Vall Records on a Direct-to-Vinyl session and recorded 21 vinyls, a photoshoot, PR campaign, a couple live streams here and there, updated our website and we’re pressing some CD’s for a radio campaign starting later this month. We were just invited today by iVoted Concerts to perform Nov 3rd to support voter turnout. We are staying busy luckily.

We are heading to some troubled waters this winter. Stay positive and believe in science. Try to fill in the gap between left and right first and foremost by not labeling yourself as neither. I know it sounds weird when it shouldn’t, but empathy and respect are the first steps to a more social and gender just society.

Don’t be strangers. Feel free to reach out to us anytime. We try to be as responsive as possible. Bear hugs and long live Rock n Roll.

Posted by The Music Korner at 9:58 PM