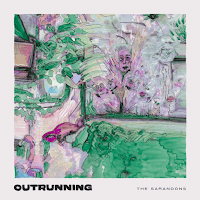 On their latest EP Toronto five-piece The Sarandons present six well-crafted songs that are entrenched in indie rock (opening cut and should be hit “Lately I Believe” has a really cool Kurt Vile vibe to it) with a little roots rock and some psychedelia (see “Rake The Bay”) thrown in.  With the exception of the slow, haunting "Caught In A Dream", everything here is full of shimmering guitars, glistening keys, strong vocal harmonies and infectious beats all layered together with never ending hooks that make this EP an absolute winner from start to finish.

Posted by The Music Korner at 11:11 PM No comments: 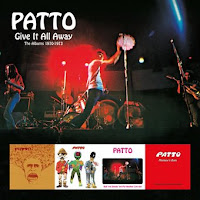 As the 60‘s psychedelic pop band Timebox evolved over their 5 year career they eventually split with 4 of the 5 members moving on to form Patto.  With Give It All Away – The Albums 1970-1973 Cherry Red has compiled a box set containing remastered versions of Patto’s four releases along with a handful of bonus cuts (for those interested the label has also in the past released each of these albums in individual expanded editions with more bonus cuts).

On their eponymous debut the band lay out a sound that has a foundation that is largely bluesy rock that’s reminiscent of Free and Humble Pie, but is often fleshed out with some jazzier elements especially in Ollie Halsall’s guitar work (extremely impressive on “Red Glow”) and John Halsey’s drumming.  Mike Patto’s vocals are right up there with the likes Paul Rodgers and Rod Stewart and the musicianship is top notch throughout with production that’s kinda raw, giving the songs a more spontaneous feel (the liner notes say that the production for this first disc was rushed, which definitely added to this raw sound).  A couple of real notable cuts are “Money Bag” and bonus track “Hanging Rope”, both of which delve into some extensive free jazz passages.

With their sophomore release Hold Your Fire the band treads a similar path as their debut, but things are a little less raw and the production is a little more polished.  Halsall’s guitar playing continues to impress throughout and he also shows his prowess on the keys on a few cuts (the extremely strong title track and “How’s Your Father” showcase this) as well as the vibes on “Magic Door” (it’s a mystery to me that he isn’t mentioned in conversations as one of the greatest guitarists).  Closing out this disc are a couple of bonus cuts “Beat The Drum”, which is a largely instrumental track showing their free jazz sound again and featuring Halsall on piano and vibes, but no guitar and “Bad News”, another solid bluesy rocker with some jazz elements.

For the third album Roll ‘Em, Smoke ‘Em, Put Another Line Out the band took a definite left turn all the way around.  Since they were known to have a bit of a humorous side to their live show they decided to do the same on the album, but often went a little too far.  Musically they also shifted gears with alot more emphasis on keys and less on guitar.   “Singing The Blues On Red” sounds like a James Brown tune, ”Turn Turtle” is a good bluesy rocker with some Jerry Lee Lewis style piano, and then there‘s “Mummy”, a strange spoken word track with no instruments that leaves you wondering what they were on and how it ever got on the album and then there’s the closer “Cap'n' 'P' and the Atto's (Sea Biscuits Parts 1 & 2)”, which is a sea shanty. Having said all that there are tracks like the ragged, stripped down blues swagger of “I Got Rhythm" and the raw, powerful “Loud Green Song”, where Halsall’s shredding guitar work sounds like something from the future, and are a couple of the best songs the band released.

When the band went into the studio for what would be their fourth and final album, Monkey’s Bum, Halsall wasn’t happy with the direction Patto had the band going and left the band halfway through recording.  In order to finish the album the band brought in saxophonist Mel Collins to fill in the gaps, but once it was completed, since there wasn’t a band to support it, the album ended up being shelved. Several times over the years there were poor bootleg copies of the album released until it was officially released in 2017.  While the basic sound of the album is definitely along the same lines of their previous efforts and Halsall’s presence can really be felt in the guitar work of songs like “My Days Are Numbered”, “I Need You” and “Hedyob”, as well as being the vocalist on “Sausages”, there is a more commercial feel to album as a whole.  To me the horns that were added to some of the songs give an interesting twist with “Sugar Cube 1967“ even coming off a little reminiscent of early Chicago. Overall, Monkey’s Bum is a solid release, but when put up against the first two albums it is the most mainstream of the four and loses a little of what set them apart.

My only real complaint with this box set is that I would like to have seen more of the bonus cuts that are on the individual expanded versions of each release included, but if like me you were unfamiliar with Patto before now, Give It All Away – The Albums 1970-1973 is a great way to get to know this underappreciated band.

Posted by The Music Korner at 2:20 AM No comments: 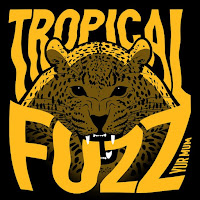 With nothing more than the fuzzed out, speaker rattling bass of frontwoman Anelise Kunz and the classic rock flavored drumming of Fabio Couto, Tropical Fuzz from Brazilian (now London-based) band Yur Mum somehow manages to come across like Kyuss and Fu Manchu getting together with L7 and putting on a punk show in the middle of the desert.  Having said that there is an everpresent melodic groove and plenty of diversity throughout the whole album from the extremely infectious blast of opener “Banana Republic”, the hard-rock sounds of the title track and the almost pop-like hooks of “Dig Deep” to the angry punk aggression of “Crazy”, the darker, slightly doom-like “Black Rainbow” and the laid-back moodier, tropical beats in “Rio 69“.  From the bass blast at the beginning to bass drone fadeout at the end Tropical Fuzz is an outstanding album.

Posted by The Music Korner at 2:28 AM No comments: