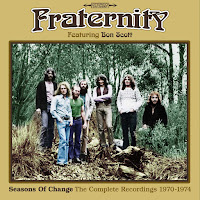 Before becoming the lead singer of AC/DC, Bon Scott fronted the band Fraternity.  Seasons of Change is an outstanding 3 disc box set that contains their two studio albums, which have been remastered from the original tapes, along with a third album that is actually a collection of session tapes and some live recordings.  In addition to this there are also non-album single and EP tracks.  Disc one starts off with their debut release Livestock, which opens with a couple of rootsy rockers (the title track and “Somerville”) with a vibe not so unlike The Band and The Allman Brothers.  The next cut “Raglan’s Folly” finds them bringing in prog elements reminding me of a rootsier cross between Jethro Tull and Procol Harum.  After that they shift gears with the percussion driven, bluesy jam of “Cool Spot”, which has a bit of a Santana feel.  Other highlights on the debut are “Jupiter Landscape” and the dramatic “If You Have A God”.  Closing out disc one are 6 bonus cuts taken from 3 singles including the jaunty “Why Did It Have to Be Me”, an interesting cover of The Moody Blues “Question” and “The Race”.

By the time they released their second release, Flaming Galah, they had added new members on harmonica, piano and slide guitar to further enhance that country rock sound.   Because of this they decided to re-record four songs from the debut to showcase this added element.  While the change is definitely evident, for the most part it isn’t too drastic with slightly newly named “Somerville RIP” being the most evident with alot more emphasis on the keys and harmonica. As for the new songs the band for the most part moved away from the prog elements that popped up from time to time on the debut and moved further into the aforementioned country rock sound.  While The Band continues to be the most comparable (their outstanding cover of their song “The Shape I’m In” is actually one of the bonus tracks on this disc) there are some CSNY like harmonies here (especially on “If You Got It”) and the more rock oriented “Hemming’s Farm” has a bit of The Faces vibe.  Also included as bonus cuts on this disc are single versions of two of the album cuts and their live performance of “Seasons of Change” and “If You Got It” from Hoadley’s Battle of the Sounds in 1971, an annual band competition held in Australia from 1966 to 1972 that they won that year.

Second Chance, the third disc of the box set is actually, with the exception of three, a collection of previously unreleased tracks recorded by the band between 1972 and 1974.  First up is “Second Chance”, a more straight ahead rocker and the last song recorded by the band with Bruce Howe on vocals, because Bon had just left the band. The next six cuts are demos that were recorded in England.  Some of these like the blues tinged roots rocker “Tiger" and the cover of Don Nix’s “Going Down" show signs of the band evolving a little towards a more straight-ahead rock sound, but then there’s also the more root/blues oriented “Requiem" and “Patch of Land” that still show where they came from along with a very funky jam alternate version of “Cool Spot”.  The last of these demos is “Hogwash” a kinda goofy song that is notable for Bon’s spoken word vocals that would resurface from time to time later on in AC/DC.  The Band shows up once again on a cover of “Chest Fever” that was recorded during an Australian TV documentary about the band.  Next up are four cuts recorded live on a South Australian tour including a couple Chuck Berry covers, another cover of The Band (“Just Another Whistle Stop) and the only recorded version of the song “The Memory”.  Closing out the box set are four cuts that have Vince Lovegrove, Bon’s old bandmate in The Valentines on vocals and backed by the band.  Interestingly two of the songs he sings are covers of Fraternity songs “Livestock” and “Getting Off” (renamed “Getting Myself Out Of This Place”) that aren’t that unlike the originals.  Completing the package is a fantastic booklet with a detailed biography, song notes and anecdotes from the surviving members and tons of pictures.  Seasons Of Change is a well deserved look back at this underappreciated band’s place in music history and shows there was more to them than being Bon Scott’s band prior to joining AC/DC.

Posted by The Music Korner at 6:23 PM