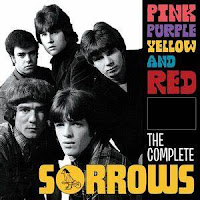 Although they did manage to have a minor hit in the UK with the song “Take A Heart”, hitting number 21 on the charts in 1965, for some reason The Sorrows were one of the lesser known bands in the freakbeat scene and were virtually unknown in the States.  Throughout the course of their initial run from 1963 to 1969 the band went through quite a bit of a revolving door members-wise and there were two distinct phases of the band.  Pink, Purple, Yellow & Red: The Complete Sorrows is an extremely comprehensive four-CD box set that collects all of their recorded work along with a multitude of bonus tracks, many of them previously unreleased.

Opening up disc one is a collection of the band’s first singles (many of these tracks combined with a few more that are included after the singles on this disc make up the mono version of their debut album Take A Heart) which do an excellent job of laying out their upbeat R&B laced garage rock sound.  Also included here are nine more unreleased songs,  four that were recorded at this same time as the album and five that were recorded in 1964 by the legendary producer Joe Meek that showcase the blues and R&B foundation of their sound (included in these are covers of “Hoochie Coochie Man”, “Georgia On My Mind” and “Smoke Gets In Your Eyes”).

Disc two starts off with the stereo version of the Take A Heart Album followed by a slew of bonus cuts including several German and Italian language versions of their songs from singles released in those countries and a few more unreleased tracks.  Ironically at the same time as these foreign language versions were taking off lead vocalist Don Farden and bassist Phil Packham both left the band.  At this point the band soldiered on as a trio with guitarist Pip Whitcher also picking up lead vocals and rhythm guitarist Wez Price moving to bass, and with the success of these Italian language singles they became huge stars in Italy, starting phase two of the band.  Following this success they recorded two versions of the song “Pioggia Sul Tuo”, which were taken from a promo only soundtrack to the movie Come Imparai Ad Amare Le Donne and are included on disc two.  These are notable because they were collaborations with the legendary composer Ennio Morricone.  The first is a beautifully arranged version with an stellar string arrangement, while the other is closer to the band’s garage rock sound.  One other soundtrack tune can be found here in the form of the outstanding feedback laden “Ypotron”, which was the theme to an Italian spy movie of the same name.

Kicking off disc three is Old Songs New Songs, the band’s second (and final) album that was recorded for the Italian label Miura.  This time around the freakbeat sound of the early days has largely been replaced with a disc full of Cream and Vanilla Fudge styled psychedelic rock mixing originals with their covers of the Small Faces (“Rollin’ Over”), Traffic (“Heaven Is In Your Mind”, “Dear Mr Fantasy”) and Family (“Hey Mr Policeman”, ”Old Songs New Songs”). Another handful of bonus cuts are also on this disc including some single versions of cuts from the album (a couple in Italian), three demos recorded in 1968 by band members Pip Whitcher and Roger Lomas that are more on the pop side of things (two of these songs show up here again performed by Lomas’ band The Eggy, but this time around they have much more of a freakbeat sound to them).  Closing the disc out are two more songs from Whitcher and Lomas, a couple of stomping glam rock tunes from their 1974 single from their band Renegade.

The first half of disc four contains a nine cut acetate demo originally recorded for Old Songs New Songs.  Alongside alternate versions of four songs that did end up on the album are covers of “Don’t Let Me Be Misunderstood", The Bee Gee’s “New York Mining Disaster 1941“ and The Beatles “We Can Work It Out” and two originals that didn’t make the album.  Quite often the sound on these cuts has more reliance on the keys that gives them a little more of a prog rock vibe.  The remaining eleven tracks are from a 1980 Sorrows reunion show in Coventry featuring Pip Whitcher, Wez Price, Phil Packham and Bruce Finlay.  Although the sound quality is a little weak and the set is primarily covers they do include really enjoyable versions of their songs “Let Me In” and “Take A Heart”.

Rouding out the box set is a 32 page book full of pics, detailed track listings and an essay covering the band’s history. Pink, Purple, Yellow & Red: The Complete Sorrows is an extremely comprehensive collection of the history of the band and should definitely please fans of the band and bring some new ones to the fold as well.