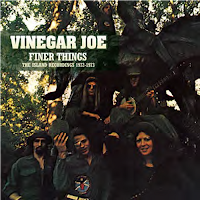 Before his days as a solo artist, Robert Palmer, along with Elkie Brooks (a successful solo jazz/rock/blues vocalist in her own right in the UK, but lesser known in the US) and guitarist Peter Gage, were the core of the British rhythm and blues based rock band Vinegar Joe.  Formed from the ashes of Dada, a twelve-piece band that counted the three of them amongst their members, although Palmer joined the band after their one album was released, Vinegar Joe released three really great albums that along with four bonus cuts can be found on Finer Things: The Island Recordings 1972-1973.

On their self-titled debut the band starts things off showcasing alot of their bluesier influences.  After opening the disc with Palmer's lead vocals on “Rusty Red Armour”, a catchy tune with a bit of a Stones-y R&B swagger, Brooks takes the mic for a couple songs with “Early Morning Monday”, a rocking blues tune that showcases her powerful vocal chops that remind me a bit of Janis, and the laid-back “Ride Me Easy Rider”, a cut that also spotlights some excellent slide guitar from Gage.  Next up the band shows a bit of a early 70‘s Southern California vibe with the beautiful ballad “Circles” and with “Leg Up” you can hear alot of where Palmer would go a few years later with his solo career.  The most interesting track is the keyboard driven “See The World”, which finds the band delving into a very prog sounding direction and definitely sets it apart from everything else here.  “Never Met A Dog (That Took To Me)” is a great, straight-ahead rocker with more stellar slide guitar work from Gage and “Gettin’ Out” is a jaunty, piano driven soul tune that really let both vocalists shine and is another standout.  The last two songs give Brooks the opportunity to show her softer side with the bluesy ballad “Avinu Malkenu” and the slow, jazz of “Live A Little Get Somewhere”.  Closing out the first disc is the bonus track ”Speed Queen of Ventura”, a soulful, psychedelic acid rocker  that was originally the flip side to the “Never Met A Dog” single and is definitely unlike anything found on the album.

With album number two, Rock And Roll Gypsies, blues are still a big part of their sound, but the band does start shifting a little away from that in favor of a more rock direction. This is evident from the opening tracks “So Long”, an all out rocker that is full of swagger and finds Palmer and Brooks trading off vocals, something that really didn’t happen much on their debut, and the infectious southern rock-tinged “Charley’s Horse”.  They slow things down a bit on the next couple songs, the title track, a laid-back, bluesy tune with a bit of a country vibe as well as “Falling” with it’s laid-back funk groove.  Other highlights on this disc are “Buddy Can You Spare Me A Line?”, a blues song with a bit of a shuffling beat, harmonica and piano, “Forgive Us”, a really nice ballad with Palmer and Brooks trading off vocals again along with their strong harmonies in the chorus, and a really strong cover of Hendrix’s “Angel”.  The single version of the title track is added on to the end of disc two as a bonus cut.

For their final record, Six Star General, the band once again moved in an even more rock direction as evidenced right out the gate with the straight ahead rocker “Proud To Be (A Honky Woman”) highlighted once again with Brooks’ bluesy vocals and Gage’s slide guitar work along with some rollicking piano work.  The band also got a little experimental at times on a couple tracks like “Food For Thought”, with it’s funk groove and strong vocal interplay between the two vocalists, but with some squiggly keys that give it a bit of an early prog sound and can be a little distracting, and also with Gage’s use of the talk box on “Talkin’ Bout My Baby”, a slinky blues tune with some raw, gritty vocals from Palmer.  Some of the other standout tracks include the country flavored rocker “Dream My Own Dreams” with it's great honky tonk piano, “Stay True To Yourself”, a funky rock tune with a touch of a reggae bass and some synths, “Let Me Down Easy”, a blistering rocker with Brooks Joplin-esque wail and Gage tearing it up on guitar, and “Fine Thing”, another really good bluesy rocker that once again shows a glimmer of Palmer’s future solo work.  Lastly is “Black Smoke Rising From The Calumet”, a track that I think is probably the best song of the band’s career - a beautifully arranged tune shifting throughout from jazz to blues, showcasing the band’s musicianship as well as Brooks diversity as a vocalist.  Closing out disc three are a couple more bonus cuts, one is just the single version of “Black Smoke...”, but the other is “Long Way Round”, a funky rocker with a bit of a Joe Cocker vibe that really would have been a welcome addition to the album.

All the tracks have been remastered for the first time from the original Island Records master tapes and sound great.  Rounding out this outstanding box set is a booklet full of pictures and memorabilia along with exclusive interviews from both Gage and Brooks.

Posted by The Music Korner at 9:21 PM