Complex - Live For The Minute: The Complex Anthology 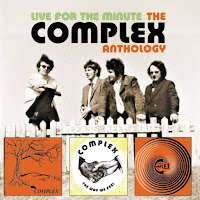 While there are a lot of great obscure bands that end up with box sets devoted to their careers, most were not as obscure as Complex.  Live For The Minute: The Complex Anthology is an outstanding three-disc collection from a band that over their career from 1968 to 1978 only released one single and two extremely rare albums that each had pressings of 99 copies (pressings of under one hundred discs avoided the need to pay any Purchase Tax).  They sent copies to record companies and places to potentially book shows and then whatever was left they sold at shows for one pound sterling.  The discs ended up becoming much in demand and in 2015 a copy of the debut sold on eBay for £10,000.  Not only does this box set give everyone the chance to hear these incredible releases there are also twenty-six bonus tracks consisting of everything from alternate versions and demos to a previously unreleased acetate recorded in March of 1972 and some previously unreleased songs recorded from 1976 to 1978.

Formed in the town of Blackpool in Lancashire, England, the band was initially comprised of Brian Lee (guitar), Tony Fisher (rhythm guitar), Lance Fogg (bass) and Tony Shakespeare (lead vocals and drums).  Not long after the band’s formation Fisher decided to leave the band, but his replacement only lasted a short while and he returned to the band briefly before joining the Army and being replaced by Steve Coe, who not only brought with him some great songs he had co-written with a friend of his named Bob Mitchell, but also ended up really giving them a distinctive sound since he played organ instead of guitar (he actually only played piano when joining the band, but then he and his mother purchased an organ for him to play).  First up on disc one is the elusive eponymous debut.  Starting things off is "Funny Feeling", which opens with Coe’s distinctively unique organ before leading into a very infectious, sunshine-y pop tune with just a hint of psychedelia.  The pop continues on the next track, "Message From The Year 2000", a pretty, more laid-back tune driven by organ and acoustic guitars.  At this point the band shifts gear several times, first with "Green-Eyed Lucy", an awesome rocker with a bit of a funk undertone with more killer organ and guitar work, then with "Josie", an organ driven ska flavored tune, and then onto "Witch's Spell", an all-out acid rocker with even more great guitar solos and the ever-present organ.  Other highlights here are the darker sounds of "Self-Declaration", often very reminiscent of The Doors, especially the organ fills, which are quite different than elsewhere on the album, "Storm On Way", a track that takes us back to the upbeat pop that started the album off and "Mademoiselle Jackie", a slower, kinda folky baroque pop tune.  Closing out the debut is "Live For The Minute", an excellent slow burning, bluesy rocker with another dose of stellar guitar work throughout.  Also included on disc one are five bonus tracks starting with two tracks recorded before the debut in July 1970 for an acetate-only single containing a cover of Joe South’s “Hush”, which is not so different from the recently released version from Deep Purple and an alternate version of “Images Blue” that is a bit slower than the one on the album.  The remaining three are an alternate versions of the album track “Norwegian Butterfly” and an alternate version as well as a demo version of “Green-Eyed Lucy”.  While the hope of label interest was dashed when they received no feedback at all it should be noted that while the music itself was great, the quality of pressing ended up being extremely poor.  A friend had told them about a pressing plant in Scotland that had very good rates, so they sent the tapes there to be pressed, but when they got the pressings back it was obvious that the rates were good because they didn’t know what they were doing.  The volume had to be turned up to three times the normal level and when that was done the hissing, crackling and popping of the vinyl really stood out.

Even though the results of their debut release didn’t turn out the way they had hoped the band pressed on with plans to record their second album.  As with the debut, their second disc The Way We Feel opens with another infectious bubblegum pop track in "Every Time I Hear That Song".  "Am I" starts with a Small Faces like piano that evolves into a nice slow burning, laid back soulful rocker, while "We Don't Exist" is a bit of a dance flavored tune with a sprightly bouncing organ throughout that’s complemented with a funky bottom end.  The next cut "Lemon Pie Fair" is a decent little psychedelic pop tune and "The Way I Feel" is an extremely bouncy pop tune driven by hooky organ passages similar in vibe to the Tremeloes that to me is the catchiest tune they ever released.  "Moving Moor" is a very interesting instrumental that really showcases the guitar and keys with some really catchy pop hooks and a bit of a prog vibe.  Next is one of the weaker cuts in the somewhat generic ballad "Jeananette" followed by the upbeat pop sounds of "Hey Girl You've Got Style".  Closing out the album is the six and a half minute rocker "If You Are My Love", which starts with a ripping guitar solo entwined with the organ and evolves in a bit of a jam with the guitar and organ continuing to wind around each other.   A couple more bonus tracks are included on this disc with an alternate version of "The Way I Feel" as well as an alternate version of “Moving Moor” on which the organ is a little softer making it more appealing than the album version.  Unfortunately for the band this album still didn’t really do anything to further their career.  Making matters worse, at this point Steve Coe decided to leave the band to study music at a teacher training college in London.  This was a major blow to the band as they not only lost their organist (although they did replace him with keyboardist and classically-trained musician Mike Proctor), but they also lost their main songwriter.

This takes us to the final disc in the set, which with the exception of the two tracks released as a single, are all previously unreleased.  First up are five tracks from a 10” acetate the band recorded in March 1972 at Radio Blackburn, and the only recordings with Proctor.  The influence of Proctor is immediately evident on the two songs on side one with "No Title (We Don't Know Yet)", a very good eight-and-a-half-minute long tune that is pretty much straight-up prog rock with the ever-present organ now replaced with keys, and the just over six minute "To Make You See Me", a solid classic rock tune with some really nice instrumental passages that again showcase their solid musicianship.  On the flipside the band decided to record three fairly diverse cover versions of recent hit songs – Redbone’s "The Witch Queen Of New Orleans", which has a bit of a funk groove, Jimmy Webb’s “By The Time I Get To Phoenix” and Isaac Hayes’ “Theme From Shaft”, both of which are enhanced nicely with the organ.  A little over a year after these recordings, Proctor was replaced by Keith Shackleford, who joined the band after Brian Lee and his mother were discussing Proctor’s departure in the launderette their family owned and she just so happened to ask the next customer through the door if he happened to play keyboard and he said, “Yes I do, actually!”  He then left his current band Bitter Harvest and joined Complex. At this point the band got the attention of music publishers/management company Honest Injun, who were impressed with “Moving Moor” from The Way We Feel and had them audition by recording new takes of that song and “We Don’t Exist” (also from The Way We Feel), as well as “Teenybopper Joe”, a new song and the first contribution from Shakespeare.  While the two re-recordings don’t really add anything new to the original versions, the new cut is a catchy pop tune with a hint of glam.  Unfortunately for the band, Honest Injun ended up wanting to sign the songwriter instead of the group, which resulted in Coe getting a publishing deal.  At this point the band decided to move in a more mainstream pop direction which didn’t sit well with Fogg, who then left the band to be replaced by Dave Yardley.  The band  also signed on with a new manager, Johnny Burton, and recorded "Smiley Anne", another hooky, glam-tinged pop tune which led to them getting a deal with Pye Records.  They intended on releasing that as a single, but instead the single consisted of "Who Got The Love" and "She Turns Me On", a couple of generic Seventies sounding pop tunes that are quite possibly the worst songs of their career.  They also recorded "Down To The City" at the same time, another previously unreleased song included here that is definitely better than the two single cuts, with a bit of a rock edge, but still has its foot planted too far in Seventies pop schlock.  Closing out disc three are six previously unreleased songs recorded between 1976 and 1978. The first four of these find the band moving back in a more rock direction.  "Jubilee" throws in a bit of glam, while "Who Do You Think I Am" and "Cruel Woman" are more straightforward with plenty of hooks and lots of great guitar work.  "The Crack" is a strong and very interesting song with a really fun vibe to it mixing hard rock with some prog and the last two, "Susie My Friend" and "Dial 999", are a couple of really catchy songs that find the band moving in a bit of a quirky new wave direction.

Grapefruit has done an outstanding job of compiling all these tracks into a great package with a booklet that documents the band's history and include lots of pics and memorabilia and now makes this hard to find music and so much more available to everyone.

Posted by The Music Korner at 9:27 PM