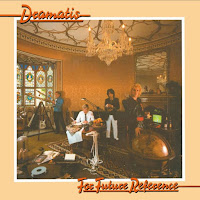 In late April 1981, Gary Numan performed three shows at Wembley Arena that signaled his retirement from live performances.  At this point, his band, RRussell Bell (guitars, keyboards), Chris Payne (vocals, keyboards) and Ced Sharpley (drums), along with Gary’s extra keyboard player, Denis Haines, decided to form their own band Dramatis (bassist Paul Gardiner wanted to start a solo career).  A few days after those shows the band was signed to Elton John’s Rocket Records and over the next few months they released three singles, “Ex Lunia Scientia”, “Oh! Twenty Twenty-Five” and “No-One Lives Forever”, then in September they released their debut album For Future Reference, which is where this new two-disc deluxe version kicks off.

Opening things is the album version and differently spelled “Oh! 2025” a catchy synth rock tune with a hint of Devo in the vocal delivery.  On “Human Sacrifice” they go in a bit of a colder, darker direction with some tribal percussion, viola and jolting synths.  This darker sound continues on the next track “I Only Find Rewind”, which at first reminds me of Berlin’s “Metro” (ironically also released in 1981) with vocals that are sung lower than the prior songs, and a really nice upbeat melodic break towards the middle.  "No-One Lives Forever" is another bouncy, upbeat catchy synth tune with some really good guitar work setting it apart.  This brings us to “Love Needs No Disguise”, which largely due to the contribution of Numan on vocals was their biggest hit.  The lyrics are about their time in the Gary Numan band and it just so happened that he had stopped by the studio the day they were recording it.  He liked the song and asked if he could sing on it and it ended up reaching 33 on the UK charts (it also ended up being released on Numan’s label Beggars Banquet and was credited to Gary Numan and Dramatis).  The song itself is without a doubt the album’s high point, a very captivating tune, again kind of darker and with a very hypnotic, atmospheric sound full of swirling synths, viola and piano.  Starting with a very beautiful classical sounding section of piano, viola and keys “Turn”, another standout track, evolves into a very upbeat song meshing synth heavy dance beats with very dynamic prog instrumental passages.  “Take Me Home” is a hauntingly beautiful, somewhat distorted, piano piece accompanied by viola and pleading vocals repeating the title, while “On Reflection” is a bright, pop tinged tune that brings to mind Ultravox.  Closing things out is “Ex Luna Scienta”, which was initially their first single and the first song they recorded as Dramatis, and sounds like Visage meshed with ELO, thanks to their use of vocoder.  Disc one also contains eight bonus songs consisting of three single tracks and five twelve inch mixes.  The single tracks here are “The Curtain” (b-side of “Oh! Twenty Twenty-Five), a very captivating piano/synth instrumental, “Face On The Wall”, a hook heavy synth driven pop tune and “Pomp And Stompandstamp”, an edgy instrumental with modern day classical and prog synth runs twisting and turning around the occasional crunching guitar licks (these last two were non-album tracks released after the album.

Following the opening cut on disc two, which is a medley of four album tracks stitched together as a sales sampler and included on the flipside of “No One Lives Forever”, are six seven inch single tracks.  Included in these are “Lady DJ”, which is driven by a really cool funky synth beat and finds them using vocoder in the chorus, and was released as the b-side to “Ex Luna Scientia”, and “The Shame”, an epic song, where all the pieces really come together and was released as a single after the album was released.  Their final release was the single “I Can See Her Now”, a really pretty pop tune that saw them hitting the charts again peaking at 57 on the UK charts.  “One Step ahead, which was the single’s flipside, is a spritely synthpop instrumental.  Closing out disc two is a previously unreleased BBC in Concert performance from the Paris Theatre in May 1982.  Opening the show is the previously unreleased “Sand and Stone”, a fairly taut tune that leads into “I Only Find Rewind”, which has a rawer, almost punk energy not present on the album version.  The performance of “Face On The Wall” maintains all the hook heavy catchiness here and “I Can See Her Now” is heavier than the studio version with more of a rock edge.  While the playful, more dynamic sounds of “Turn” and “Pomp and Stompandstomp” showcase their musicianship, their take on “Love Needs No Disguise” is outstanding with Chris Payne handling the vocals just as well as Numan.  “The Shame” then closes the show out brilliantly.  The CD also comes with a booklet containing a really good band history, an interview with RRussell Bell and recollections on all of the songs.

As the band were working on songs for a second album they received a call from Numan asking if they would consider returning for both recording and touring (at this point Denis Haines had left the band and joined The Hollies), which they decided to do.  Around 2012 they had plans to reunite, but those plans failed to materialize after the passing of Ced Sharpley.  After several more years of uncertainty, 2020 saw the release of a new Dramatis single “A Torment of Angels”, which can be found on their bandcamp page (Dramatis).   Since then they have also played some live shows and have plans for a new album.

Posted by The Music Korner at 1:28 AM