Interview with Redeye Caravan
Greek band Redeye Caravan recently released their outstanding debut "dark country" album Nostrum Remedium.  I had the chance to talk to them through email about the album, the music scene in Greece and more. 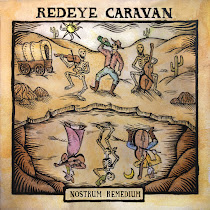 Can you give me a quick rundown of the band’s history?

Hi and thanks for having us! The story of the Caravan goes way back, before it became what it is today and that’s because most of us knew each other and also played together (and continue to) in other projects as well! So, friendship was already there, the background was set and the rest is “Redeye Caravan”! The band started in the Autumn of ’18 by Akis (vocals, acoustic guitar) and Valantis (vocals, bass). The music and lyrics inspired Panos (electric, slide, acoustic guitars, keys, vocals) to come aboard and soon Eleni (vocals), Thanos (violin), Stefanos (harmonica) and Paris (drums, percussion) followed… now we all are the Caravan!

How does the songwriting process tend to work?

It usually goes like this: Akis will bring the music and vocal melody, Valantis will write the lyrics inspired by it and Panos will continue with the orchestration so that the rest of the band can provide their best to bring out the atmosphere of each song. It’s not the “golden recipe” but it works great for us!

The band is referred to as “dark country”, but I noticed you had a track on a compilation of metal bands and there have been metal publications reviewing the CD.  I think there is a vibe to your sound that could appeal to metal fans.  What is your take on that?

Dark Country as a title is describing a huge aspect of our music and lyrics. We don’t care much for labels, as we think that music is one, but at the same time any band should somehow state a genre at least. Our music has its roots to blues, rock and - of course - country music with a dark twist regarding the lyrics. As an essence, though, it can surely appeal to a much bigger crowd, since it’s also atmospheric, cinematic and played by heart! That being said, it is only natural to appear in a lot of rock and metal webzines!

I also hear a little Ennio Morricone “spaghetti western” feel to your music at times.  Would you agree?

There’s no argument here, haha! One of our beloved composers could not be absent as an influence in our music.

There are a lot of sound effects throughout the CD along with things like handclaps and stomping that really give the music a very visual sound.  Could you tell me a little about that?

To “visualize” our music like that was on our minds since the beginning! We always like to transfer the listener as close as it gets to our stories and this seemed like an one way street to do so. It kind of makes things a little more real and we love the feeling!

There are alot of images of and references to death.  Is there an underlying theme or concept to the CD?

The truth is that death is making (or is about to make) an appearance on each
and every one of our songs in one way or another, so, yeah, we suppose that there’s something like a theme there going on, haha! No connection between the songs though and thus “Nostrum Remedium” is not a concept album.

There’s a short piano instrumental called “Celebration” that closes the CD perfectly, but it’s listed as a bonus track.  Why didn’t you just include it everywhere as the last song?

“Celebration” is a great closer for the full experience of our album and we wanted to “reward” the fans who downloaded the whole LP or purchased the CD with it! That’s why we decided to keep it as a bonus material.

I didn’t see any mention of live shows on the internet and couldn’t find any live videos.  Have you played live and if so, how easy is it to get the sound of the CD to translate over to live performances?

The coronavirus and the lockdown happened right before we could present our album live. We worked hard for the compositions and the recordings and we were just about to share it with the fans, so when this is all over - and hopefully it will be soon enough - then we’ll be ready and we’ll be sure to get really close to the CD sound!

I love the 3 videos you have released, especially the animated ones.  Can you tell me about them? 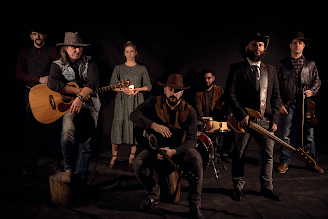 Panos Makoulis and he made a hell of a job! It all started as a simple idea that ended up really far from where it started, haha! “The Descent” was made by John Konstantinopoulos who beautifully brought out the darkness of the song!

Have you considered doing one for each song?

This would be great but depends entirely on Panos’ free time and he is a really busy man!

How is the music scene in Greece and how does the band fit in?

The truth is that we never got into the process of thinking like that! We do what
we love and have a great time recording and rehearsing! In Greece there are many folk and blues bands and artists that we like, admire and would like to share the stage with.

Do you have any other bands that you would consider kindred spirits and recommend to readers?

Jumberingas, Grey River & The Smoky Mountain, Small Blues Trap, Bag Of Nails, Dr Albert Flipout's One Can Band (Greece) & of course The Dead South, Graveyard Train, Colter Wall and so many other bands and artists!

Is anyone in the band involved in any other bands or music projects?

How has the band been impacted by the coronavirus pandemic?

Except for the no live part, it all went smoothly for all of us since we are all healthy both us and our families. As a band, we remain active since we already work on new ideas for our second album, so we won’t just let the time pass!

We hope it all ends quickly so we can all safely return to all that we love - to create and share! We want to thank you for our nice conversation and wish you all good health and courage in these difficult times that we are all going through this period!