After releasing a handful of singles, Manchester's DDE's have now released their debut EP Calm Before The Storm.  I recently had an email conversation with them about all of this, their plans for the follow-up EP's and alot more. 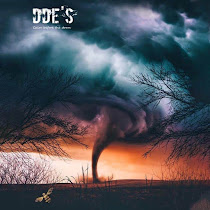 Can you give me a quick band history?

Me (Dan) and John started it just under 2 years ago and I put an add out on a musician’s page and John answered the call. We had our original drummer as well (Jack) but he had to leave for family commitment reasons and so John works with our new drummer (Alex) Dad and it was a no brainer when we heard him play!

Manchester definitely has a place in music history.  How has being from there impacted the band?

I think the way we have developed our sound is the main impact. Without really meaning too we have been able to hone a sound that is quite distinctive of all the Manchester greats. It’s the way that the city “feels” as well that comes across in our music we hope as well that is the biggest influence as well.

Even though the EP is only 4 cuts there is alot of diversity.  Was that a conscious decision?

100%. I think to show your diversity as a band is what keeps people interested and keeps them listening. The whole title of the ep relates to how each track takes you on a journey from the calming and then into the storm so yeah, the tracks were purposely laid out in that fashion.

How does the songwriting process tend to work?

Its usually me (Dan) that’s come to the band with song demo’s that I have or even an idea. But it’s usually from me just noodling about and seeing what comes from that I guess. If something clicks then I’ll work on a melody with the acoustic guitar then they sort of take a shape of their own. But since Alex has joined we have been jamming in rehearsal and new tunes have just been appearing from nowhere which is a nice change

I love “Cherry Soul”, which is extremely catchy with guitar-work that screams “rock star”.  What can you tell me about that song?

That songs is about 6 years old and its gone through so many changes (sound wise) it never really hit home how good it is until Al joined really and his drumming on it takes it too another level. It just an out and out rock n roll stomper about going out and having a good time. Simple chords and a simple meaning…but live it takes your head clean off! I wanted to go for a sort of Black Rebel Motorcycle Club vibe with it and I think that we got that on this track.

“Lucy” starts off with a virtual jam session with almost the first half of the song being instrumental.  Was it always intended to be that way?

No not at all. I came to the band with the verse and chorus but we felt that it was over to quickly so the intro literally came about from us just jamming away one night in rehearsal and it sort of clicked. I love that its so diverse from beginning to end and that’s really what we go for in most of our songs.

I checked out your earlier singles and to me several of them have that “Manchester” vibe to them and then the EP opener “It’s Gonna Get Wild” does as well, but then the next two songs on the EP have alot more punch to them.  I really don’t hear much of that on the earlier singles, besides “What Are The Rules”, which by the way is an outstanding song.  Do you feel like the band is evolving more in that direction?

Definitely, I mean since we have only been together just over 2 years we have gone through a massive evolvement of our sound and now we have started leaning more towards the heavier side. It just feels more in our comfort zone in a weird way and Al loves that side of our sound more and he really comes alive when we play the heavier tunes. The follow up to Calm Before the Storm is going to knock peoples heads off as its going to be full on from start to finish.

I heard you kinda have a plan for 2 more EP’s that are in the works.  Can you elaborate on that?

Yeah, so we have always released singles in trio’s, just felt like each set complimented one another and so we wanted to do the same with the ep’s. the next one is going be called “Something Wicked This Way Comes” and will showcase the heavier new tunes that we have been writing and then the final one is going to be called “Here Comes The Sun” and that’s going to be a much more radio friendly sort of feel. All the tracks are written and planned so we just need get studio time booked in when we can.

Before this EP you released 6 singles.  Was there any kind of plan behind starting with just singles and then releasing an EP?  Did you ever consider adding those 6 to the EP and making it a full-length release? 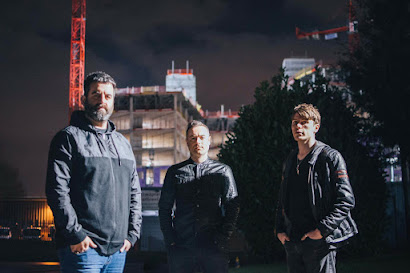 I always thought it would be a bit of a cop out to add them all together onto a single release
because they are already out there, you know what I mean? I just want to keep it fresh and keep releasing songs as much as possible. I've always felt that once a band release an album its like “this is the only thing your getting from us for at least 18 months” where as if you release ep’s every 4 months say it keeps things interesting and also gives the fans something to look forward to as they know another release is only a few months away.

I absolutely love the acoustic single “Talking Tel Aviv”.  The hooks on that are incredible and it’s unlike anything else you’ve released.  Where did that come from and is there more of that to come?

So TTA came about because our producer (Liad Broyd) is from Tel Aviv and me and him became great friends and so I literally wrote in about 10 minutes. There is a line in it  that says “Don’t you worry lady there's no Monsters down them stairs” and that’s in reference to his own band “Downstairs Monsters”.  With regards to there being more like that we will have to wait and see, songs seem to just create themselves but there is a new one called “Sunshine Sally” that will be on the 3rd EP that has a TTA vibe to it.

Your earlier single “Shoot You Down” says it features Downstairs Monsters.  You mentioned that's your producer's band.  What did they contribute?

He is literally the 4th member and without him there wouldn’t be a band. He knows our sound he IS our sound and the things that he creates for us are just unbelievable. We will send him the cuts from the studio and he will work his magic and just add SO much to the tracks that it blows us away. You should go check out his band “Downstairs Monsters” they sound like if the Beatles and the Beach Boys had a child and then that kid grew up listening to The Doors….they are mega!

How has the coronavirus pandemic affected the band?

Only really in the fact that we had so many gigs and festivals lined up to play and obviously that has all gone to shit now because of this horrendous pandemic! Apart from that it hasn’t really, songs are still being written and demos are still being made. Its been good that we can plan for the future and have focus on where we want the band to be heading.

Just to keep an eye out on all of our social media @wearetheddes for info of any up coming gigs and releases!

Posted by The Music Korner at 9:14 PM