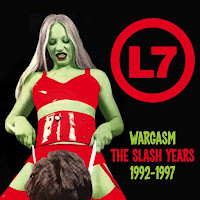 Following their debut release on Epitaph Records and it's follow-up on Sub Pop, LA's L7 signed with the major label Slash Records for three of their finest albums, which along with eleven bonus tracks, can all be found on the new box set Wargasm - The Slash Years 1992-1997.
Produced by Butch Vig, Bricks Are Heavy, their first release on Slash, finds the band perfecting their mix of punk, metal, grunge and on “Mr Integrity” even a little surf guitar, all the while maintaining a melodic hook (see their biggest hit single “Pretend We’re Dead”) and the everpresent sneer in both the lyrics and vocals.  Bonus cuts on disc one are an edited version of “Pretend We’re Dead” and the B-sides “Lopsided Head”, “Freak Magnet” and with “I Used To Love Him”, their slightly altered take on Guns ‘N’ Roses.

For their next record Hungry For Stink the band enlisted Garth “GGGarth” Richardson as producer, and while they follow a similar path, this time the overall sound is a little heavier, a little more abrasive and aggressive and a little less melodic, but all in a good way. Standouts include the single “Andres” and the semi-psychedelic tinged “Stuck Here Again”.  Bonus cuts this time around are a live version of “Baggage”, an edited version of “Stuck Here Again” and two B-sides - “Punk Broke (My Heart)” and “Interview”, which is an almost 14 minute radio interview that has to be about the most bizarre interview you will ever hear.

While there are moments that harken back to their previous releases, their final release on Slash, The Beauty Process: Triple Platinum found the band moving in a more experimental direction.  Produced by Rob Cavallo and Joe Barresi and largely recorded as a three-piece after bassist Jennifer Finch left (Belly’s Gail Greenwood filled in on bass on some tracks) the sound here is more stripped down and the band is tighter than ever.  Songs like “Drama” and “Must Have More” (the latter of which borders on doom metal) show they can still be as heavy as they’ve ever been, while others like the infectious near pop of “Moonshine” (complete with a countdown intro from none other than Lionel Richie) and the quirky acoustic tune “Me, Myself and I” show a new side to the band.  As for the final batch of three bonus cuts there is the (Piss Off Version) of "Drama" and two B-sides in the form of the outstanding spaghetti western tune “Guera” and the straight-up rocker “Worn Out”, both of which would have been right at home as album cuts.