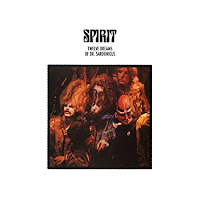 Twelve Dreams Of Dr. Sardonicus was the fourth album from Spirit and ended up being the last one with the original band comprised of Randy California, Jay Ferguson, John Locke, Ed Cassidy and Mark Andes (Locke and Cassidy were the only members on the follow-up).  It was alos the first one not produced by Lou Adler, with David Briggs, who was best known for working with Neil Young, handling production this time.  Ironically when it was released it was their lowest charting album, but is now their only album that has been certified gold.  Listening to the album today it is obvious that this was an album that was ahead of its time, extremely diverse and full of so much depth and so many layers.  This is displayed right out the gate with the multipart “Prelude-Nothing To Hide”, which starts with a gently played steel guitar solo with vocal accompaniment and then turns into a catchy rocker with a psychedelic groove full of great guitar work that includes slide, tons of effects, feedback jumping from side to side all topped off with a great horn section.  Next up is the classic “Nature’s Way”, a gorgeous tune with intertwining acoustic and electric guitars and the everpresent cowbell, and “Animal Zoo”, which is a bouncy rock song with a hint of funk and some really good piano and harmonica along with a little country flavor in the guitar work.  While there is plenty of experimentation throughout the album, it’s no more evident than on “Love Has Found A Way”, which at its core is a very catchy psychedelic track with a jazz groove, but enhanced with effects, vibes and backwards masking that runs underneath the whole song.  Following a short little interlude with the 1:02 minute “Why Can’t I Be Free”, a stripped down tune with just some acoustic guitar and whispered vocals comes another Spirit classic in “Mr Skin”, a jazzy rocker with its funk tinged beat, throbbing bass, blasting horns and pulsing organ.  ”Space Child” is a hypnotic, “spacy” sounding instrumental that’s split into sections.  It starts with a really cool piano, slowly mixing in some swirling effects before shifting into a jazzier piano and drums section and then back around to the piano that started it all before ending abruptly, but really leading into “When I Touch You”, which is a heavy, fairly dark rocker that interestingly bears more than a passing resemblance to Soundgarden (there are actually some vocal passages that if you didn’t know better you would think was Chris Cornell).   “Street Worm” has a funky vibe with bouncy piano and drums and some interesting guitar passages that gradually evolves into an all-out jam with some stellar Hendrix-like guitar and plenty of cowbell.  The band shifts gears a bit on “Life Has Just Begun” a gorgeous cut that showcases California’s acoustic guitar playing and has a bit of a rootsy flavor enhanced by some nice honky tonk piano.  They then shift again with “Morning Will Come”, a jubilant, feel good tune with a driving beat that borders on R&B punctuated by blasting horns throughout.  Slowing things down to close out the album is “Soldier”, a captivating tune driven by piano and accented by some really nice organ in the background.  Rounding out the first disc are ten bonus tracks, six of which are previously unreleased.  First up is “Rougher Road”, a more straightforward rock tune than the album tracks that does a good job of mixing acoustic and electric guitars.  “Dirty Dan” is a previously unreleased instrumental that starts off with nice interplay between guitar, organ, drums and a funky bass and then moves into a more straightforward rock tune that really showcases the organ work.  Following mono versions of “Animal Zoo” and “Morning Will Come” is “Red Light Roll On”, a lighthearted tune with some tongue in cheek lyrics with and a loose funky R&B vibe that was the B-side to “Animal Zoo”. Next up are the original backing tracks for “Love Has Found A Way” and “Street Worm” and a rehearsal backing track “When I Touch You” followed by “Walking On My Feet”, a short acoustic tune consisting of vocal, guitars and drums (according to the notes on the reel, keyboardist John Locke plays the drums here).  Closing out the first disc is a interesting live version of “Nature’s Way”, recorded at the Fillmore West on May 16, 1970 that is notable because California states on the recoring he had written the song that afternoon.

Disc two is a previously unreleased seventeen song live performance of the band recorded at the same show as disc one's "Nature's Way".  As explained by band curator Mick Skidmore in the accompanying CD booklet, the band had bad luck getting good sounding live recordings and only one board tape of this show exists and there were three versions of the tape.  With a little work in the studio he made the recording here, that is definitely not perfect, but it’s the best live recording of the band known to exist (Skidmore provides more details on this in the liner notes).  Since it was recorded in May and the album wasn’t released until November, you can hear them still working out Twelve Dreams... tracks “Nothing To Hide”, “Mr Skin”, which sounds somewhat different here, and “Animal Zoo”.  Some of the other tracks of note are the gentle instrumental “Country Echo”, the bluesy rocker “Jealous”, a tune they frequently played live and was supposedly recorded in the studio although no copy has ever been found, and a twelve plus minute version of “Mechanical World” that starts with a five minute drum solo and then moves into an heavy, slow, intense rocker with the droning organ blasting away throughout (this track was actually recorded at the Boston Tea Party on October 11,1969, because there wasn’t a salvageable version of this song from the Fillmore).  Skidmore has done a fantastic job here from the remastering of the album, bonus tracks and live recordings to his detailed essay in the booklet.  Even if you already have a copy of the album I would greatly recommend getting this new version.

(Esoteric Recordings)
Posted by The Music Korner at 12:27 AM