After forming in late 2019, but then having to deal with the inevitable delays of covid, Sydney, Australia's Asteroid Blues have finally released their eponymous debut EP.  I recently had the chance to do an email interview with guitarist Keegan where we discussed the band and their new EP, the impact of covid, what's on the horizon for the band and more. 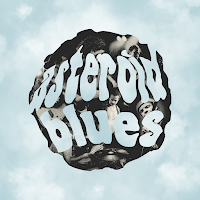 Can you give me a bit of a band history?

Tristan and I had a rippa night and woke up the next morning and just thought it would be fun to start a band, so we wrote a status asking if anyone wanted to join a band and sure enough we got some hands. We picked up lemon on bass and Corey on vox. We all grew up around the same parts so we were all already mates or mates of mates. We all just clicked and got along. Ewan on drums joined a bit later down the track, he fit in well and here we are. It’s definitely more than just a band these days, we’ve had the ups and downs but at the end of the day we are good bunch of pals that enjoy what we do and power on through.

“Blackstar” is a great psychedelic rocker, but then it also shifts into some reggae influenced passages here and there.  How did that come about?

Thanks man! "Blackstar" was actually the first tune we completed as a band!  I think when we wrote it we weren’t too sure what sound we were headed for, so we kind of just did whatever the hell came to us. We all came from different music backgrounds at the time and I guess we were still looking for a foundation or common ground. Could say there’s a lot of different influences inside "Blackstar." Turned out pre sweet but

I love the slow build of “Hallucination Bay”.  It starts off with a simple acoustic guitar and vocal and then builds and builds, but also kind of ebbs and flows at the same time.  Can you tell me a little about that song? 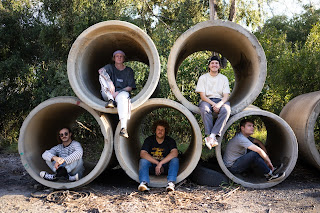 The acoustic intro idea came to us whilst in the process of recording the ep. the bloke that recorded us Isaac Lewis suggested the idea and we all jumped on board.

The foundation of the song came from our ex drummer Dylan Watson, absolutely talented man on all instruments. At the time we were all dwelling deeper into the sound we wanted to create. And when we heard the jazz and groove influence it has we knuckled down, still incorporating the heavy hitter sections we all loved.

Most of your songs have alot of dynamics with the tempo shifting at some point.  Is that something you consciously try to do or does it just happen?

Absolutely not something we do consciously! We didn’t even realize until we tried playing the songs to a click. All the fellas are super passionate, and really feel and anticipate what's coming next, so I think we all just feel when something needs to slow down or speed up and do exactly that. We are all definitely conscious of it now and considered keeping things the same tempo when recording. but thought, hey screw it this is how we play it, and it just feels right.

Were you able to work together to record the EP or was it done with you working remotely?

We were lucky enough to be able to record it all together. Was the first time we went through the recording process together so we are very lucky to have been able to experience it together!

Alot of your songs have some sections that sound like they would really enable you to expand on them when you play them live.  Has that been the case? 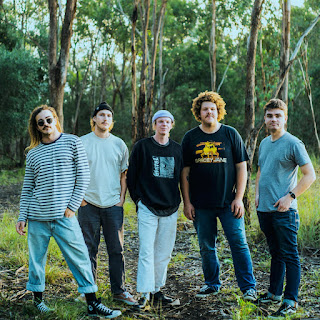 It’s something we’ve always considered. For a lot of us Asteroid Blues has been our first band, and the first time we’ve played in front of people, performed in general, so I think we’ve never gone for it just because we are just focusing on perfecting the songs live as they are. But these days we have all grown as musicians and performers so I dare say some live improv is on the way.

The band has been together for a few years, so it’s taken some time for this debut EP to be released.  I heard the new song “Fools Company” through a stream on Orbital Radio there in Sydney.  Do you have alot more songs ready and if so do you think we will be hearing them sooner than later?

Oh man, we’ve got a couple of songs up our sleeves that we are super keen to get out. Everyone’s knuckled down and worked hard on their instruments since the EP, and the chemistry is peaking now. We are super proud of the songs we’ve previously written, so we are gonna push to release new music as soon as we can!

Has covid had a lot of impact on the band?

Yeah, it definitely kicked us in the knee, it’s half the reason we sat on the first EP songs for so long. I’m pretty sure the first wave hit after like our third gig together. We were all loving life and working hard and then bam, as soon as the ball got rolling it got stopped by that damn covid-19

You recently had an album release show.  What other plans do you have for promoting the new EP?

Hopefully just more gigs dude! We are super keen to get rolling and play as many as we can!

Are any of you involved in any other bands or musical projects?

Nah man, we are all super open minded, and very versatile with our music taste and have tried other things here and there. but AB through and through baby

Hope everyone out there is kicking ass, and being great. If you are down with it, Expect more from us soon! Have a good one.