Phillip Goodhand-Tait - Gone Are The Songs Of Yesterday 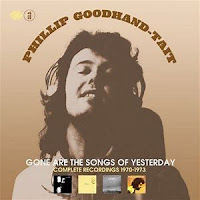 After spending some time in the 60‘s as a member of The Stormsville Shakers (later known as Circus for a short while) and also writing several songs for the band Love Affair, including “Gone Are The Songs Of Yesterday”, the flipside to their number one song “Everlasting Love”, Phillip Goodhand-Tait signed on with DJM Records, a label that released his first four albums, that along with numerous bonus tracks pulled from 7“ singles and the soundtrack to the film Univeral Soldier, make up the four cd box set Gone Are The Songs Of Yesterday.  While this box only covers those first four solo releases, it should also be noted that Goodhand-Tait has had an illustrious career that has found his songs being recorded by the likes of Gene Pitney and Roger Daltrey and he has also produced a diverse array of artists including  Magnum, Venom, Climax Blues Band, The Lords Of The New Church and Kid Creole And The Coconuts.

First up is his debut solo release Rehearsal.  As I made my way through this really enjoyable set of songs highlighted by Goodhand-Tait’s rich, soulful vocals, elements of artists like Randy Newman, Joe Cocker and a little Harry Nilsson frequently came to mind.   While there is a definite cohesiveness to the album there is also a sense of diversity.  Alongside tunes like the the soulful “Lean On Me”, which has a bit of a Cocker sound and “One Road” and “Run See The Sun”, a couple of beautiful ballads with outstanding string arrangements, there is the country blues flavored “Children Of The Last War” with it’s driving honky tonk piano and fiddle, “Climb Aboard My Bus”, which has a really cool jazzy intro before heading into a Randy Newman-esque sound complete with horns, and the banjo and horns of the jazzy “(Heaven Help) Belinda”. The aformentioned string arrangements are also of note as they are the work Robert Kirby, who was the musical director and arranger on the album and also contributed string arrangements for the likes of Elton John and Nick Drake amongst others.  Other highlights include the piano driven “Tramp", the fun, bouncy upbeat “One I Thought” and the stunning laid-back “Jeannie”.  Closing out the first disc are seven inch bonus tracks “Only Too Pleased To Help” and “Love Has Got Hold Of Me”, a couple of pretty straightforward, radio friendly tunes, the latter of which he wrote for the band Love Affair, but he ended up recording himself when vocalist Steve Ellis left that band before it could be recorded (he has noted that he ended up recording it exactly as they were supposed to).

Goodhand-Tait has said that when he was recording Rehearsal that he had no experience singing and playing piano at the same time and that when he went in to record the follow up I Think I’ll Write A Song he had mastered that by keeping the piano playing simple.  He had also now been performing live with his band and changed his songwriting to take into account the immense talent of guitarist Andy Lattimer, who later went on to cofound the band Camel.  This change in direction was also further enhanced with the production of Rodger Bain, who was known for producing heavier bands like Budgie and Black Sabbath.  The results of all these changes are an album that is overall much heavier with alot of emphasis on Lattimer’s guitar work and none of the string arrangements that were all over the debut.  Without a doubt the standout tracks are “Silverwing”, a killer song with an epic classic rock ballad sound, powerful emotive vocals and beautiful guitar-work, “Medicine Man”, a straight-ahead barnstormer of a rock tune reminiscent of The Faces with some great Jerry Lee Lewis styled piano and “In The Old Country”, with it’s laid-back, bluesy country groove not so unlike The Band.  Other highlights include the title track, “Who Laid Your Living Down”, “Oh Rosanna”, a bluesy tune with some great honky tonk piano work, and “Cold Night”, a slow, stripped down bluesy song with harmonica courtesy Ian Duck from the band Hookfoot (Duck also contributed harmonica to a couple cuts on the album Tumbleweed Connection from Elton John, Goodhand-Tait’s labelmate at DJM).  Rounding out disc two are six bonus tracks.  Most notable of these are three songs from the previously unissued soundtrack for the 1971 George Lazenby film Universal Soldier - the rollicking “Oh Ryker”, the funk-tinged, blues rocker “Motorways and Parking Boys” and the instrumental version of the Rehearsal track “Cold Night”.

With his third album, Songfall, the heavier sounding band from the previous album was gone and he shifted towards a more intimate sound once again.  This is evident immediately with the opening ballad “Moon”, a really nice laid-back track comprised primarily of gentle piano, acoustic guitar and vocals.  Almost everything here is very stripped down allowing his vocals and piano to really shine.  The absolute standout is “Leon”, a gorgeous, very heartfelt song about meeting up with an old friend only to have him die not long after the meeting.  Some of the other highlights include "Not Really Here Right Now", "New Moon Tonight", which has a bit of a rock undercurrent and "When That Day Comes", which has some really nice piano work.  There are also a few interesting cuts that move in a bit of a different direction once again with the laid-back island groove of "Blue Day", the folk country sound of "Country Green Ahead" and the really interesting protest song "Processed", complete with steel drums and tuba (per Phillip this is probably his only protest song).  He also delves into a couple of covers with slower reinterpretations of Buddy Holly’s “Everyday” and The Every Brothers’ “When Will I Be Loved”.  Also of note on Songfall are guest appearances from Rick wakeman, Davey Johnstone and Ray Cooper. Disc three is rounded out by the bonus track “City Streets”.

Rounding out the box set is Phillip’s eponymous fourth album and last for DJM Records.  Because of the success of labelmate Elton John, the recording budget this time around was much bigger with the album being recorded in 24 track and production being handled by Robin Geoffrey Cable.  While at their core most of the songs aren’t that different from alot of his previous work, the production here takes them to a different level along with the string arrangements like he used on his debut.  This is most evident on "Reach Out For Each Other", a gorgeous song with a Phil Spector like production utilizing the strings and multiple layered pianos to full effect, and "You Are", which has a bit of a psychedelic vibe to it.  As always, there are also a few tracks that set themselves apart from the rest of the album.  There’s the quirky country of "One More Rodeo", with accordion leading the way along with some horns, and "Emile", a reggae tune recorded with a reggae band that is definitely a new direction for him, and the hypnotic jazzy blues groove of "Sugar Train".  He also takes a step back into the past with the 50‘s doo wop of "Teenage Canteen" and the 60‘s sounds of "Forever Kind Of Love", a song he says is a nod to Love Affair’s “Everlasting Love”.  Rounding out disc four and the box set are three more bonus tracks with the highlight being the soulful “Almost Killed A Man”.  Also included is a nice 20 page CD booklet with notes from Phillip on the albums and his career at this time, but unfortunately without alot of details on the contributors to the albums.  This is an outstanding collection that I would highly recommend.