Howard Jones - at the BBC 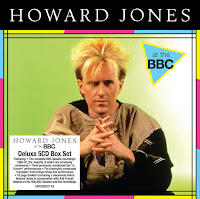 I’ll be the first to admit that when I read about a five CD box set of BBC Sessions and live concert performance broadcasts from Howard Jones, all recorded between 1983 and 1987, I was a bit skeptical.  While I always enjoyed his hit singles and I’m pretty sure I have a few albums amongst my collection, I was never a die hard fan and five CD's from a five year span seemed like alot.  Having said that I was pleasantly surprised at how enjoyable this box set is, not to mention I didn’t realize how many of his songs are so ingrained in my brain after all these years.

Starting things off are a couple of sessions from The Kid Jensen Show On BBC Radio 1 from March and May 1983.  It should be noted that this was before music was so accessible through the internet, and the BBC was very vital to artists being heard and discovered in the UK.  At the time of this first show, his debut album Human’s Lib was over a year away from being released, so this was the first time many people had heard him.  While the March appearance was a live performance in the studio, for the show in May they played Howard’s “White Tape" demo cassette.  Most of these don’t differ too drastically from their later versions, but they are a a fascinating look at the inception of many of these songs. Most notable is the version of “What Is Love” (titled “Love” at this time) as it is much slower than the album version from the next year.  Interestingly a couple of the songs on these first two sessions, “What Can I Say” and “Don’t Put These Curses On Me”, never showed up as an album track before finally making their appearance on his 2003 Best Of album.  Closing out disc one is a performance on the Janice Long Show on BBC Radio One in January 1995 focusing on tracks from his sophomore release Dream Into Action.

Another performance on the Janice Long Show opens disc 2.  While as a whole the majority of songs throughout this box have really stood up very well over the years, a few of the songs on this set like “The Balance Of Love” and “Don’t Want To Fight Anymore” sound a bit dated today, but they are definitely the exception to the rule.  Also of note is the closing track from this performance, which is a great cover of Donald Fagen’s “I.G.Y. (What A Beautiful World)”.  Closing out the second disc is the first of three concert performances that were recorded for the In Concert Radio Programme on BBC Radio One.  Recorded in October of 1983, a few months before his debut was released, the six song set is a fantastic, high energy performance where you can literally hear the enthusiasm of the young performer as well as the crowd, and is the must hear performance in this box set.

The next two discs contain the other In Concert performances, the first from May 1984 and the second from April 1985.  Even though you can hear his performances getting more and more professional and a little of that energy found on the first set is gone, these shows are still outstanding.  While the first show, with the exception of a couple tracks, are from his debut album, almost half of the second show highlights songs from his second album Dream After Dream, which was still a few months away from being released when the show was recorded, so you can really hear him trying things out with these songs in a live setting.

The final disc here contains all the songs from The Oxford Road Show, a performance that was simulcast live on BBC TV and Radio in March of 1985.  Several of these recordings were released as B-sides, but this is the first time that they have all been released, including four songs that were not broadcast during the simulcast and have never been released before now.  This show does a great job of highlighting Jones’ career up to this point with a set full of hits from the two albums he had released and shows just how tight the band’s performances were.

Complemented with a sixteen page booklet highlighted by a conversation with Jones about these shows and this time in his career, at the BBC is an outstanding box set that makes for a really enjoyable listen and even though many of the songs show up multiple times it never gets repetitive.