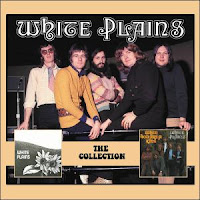 I have to admit that when I first got this box set from White Plains I had no idea who they were, but about halfway through disc one “My Baby Loves Lovin’”, a song that hit number 13 on the US charts in 1970, came on and I realized that I had definitely heard them before. They never managed to hit the upper charts in the US again (“Lovin’ You Baby” made it to 82 and they did have five top 25 songs in the UK), which is unfortunate because over the course of two albums and numerous singles they released some outstanding music that bridges the gap between lush, orchestrated 60‘s pop and early 70‘s AM pop and contains some stellar vocal harmonies.  The band actually evolved from the psychedelic pop band The Flowerpot Men who were know for the song “Let’s Go To San Francisco” and whose last three songs initially recorded as The Flowerpot Men instead ended up being the first three recorded as White Plains.  A large majority of the songs by the band were written and produced by Roger Greenaway and Roger Cook, neither of whom were members of the band, while the actual members of the band were a bit of a revolving door that almost needs a flowchart to follow who was in the band and when (the CD booklet does a good job of detailing all of this, although after all this time even the members have a hard time remembering who was in the band when).

On disc one you will find the band’s eponymous debut CD (which was retitled My Baby Love’s Lovin’ in the US) along with two bonus tracks that were originally released as singles.  An interesting fact about this album is that due to the ever-changing band lineup there were no band photos or member credits anywhere on the sleeve, with the only credits being the recording engineers and producers.  In addition to “My Baby Love’s Lovin’” (a very catchy tune, but to me one that doesn’t really truly represent their sound), some of the highlights include “Today I Killed A Man I Didn’t Know”, “I’ve Got You On My Mind”, “You’ve Got Your Troubles”, “Young Birds Fly”, “Sunny Honey Girl”, an upbeat pop tune that was later a hit for Cliff Richard and sounds a little like The Archies and “Miss Her Mississippi”, an outstanding cut that shows a more soulful side to their sound.

Even though many tracks from their second release, When You Are A King, have shown up on various compilations, disc two marks the first time the complete album has shown up on CD.  Opening the album is the title track, an absolute stunning song with a beautiful arrangement and melody that’s fleshed out with concertina and in my mind should be the one they are best known for. Among the other highlights here are “Lovin’ You Baby”, “Home Loving Man” (previously a hit for Andy Williams), “Every Little Move She Makes”, “Noises (In My Head)” and “I’ll Go Blind”, which has a bit of a Bowie vibe to it.  Disc two also contains nine bonus tracks, again all originally released on singles.  A few of these really stand out including “I Can’t Stop”, a very Crosby, Stills and Nash sounding tune (“Look To See” also sound like CSN, but borders on being a clone), “Dad You Saved The World” and “Beachcomber”, a really interesting cut that is a bit moodier than most of their other songs and has a really nice rolling organ running through it.

The final disc in the box is comprised of eleven tracks that are all rarities and are much sought by collectors.  First up are four songs by Crucible, which formed when the solo projects of two former members merged (both projects also had contributions from other former members).  An album was recorded, and while it ended up getting shelved these four tracks were used on the soundtrack for the 1972 documentary film Extremes.  These songs are more guitar driven rock bearing no resemblance to White Plains with the Beatles-esque “Box Man” and “Elvish Queen”, a folky acoustic song with a bit of a prog vibe well worth a listen.  The next four tracks are from Zenith, a band formed by three members who continued to work together after the band came to an end in 1974, and would easily fit in on a White Plains album, although none of them really stand out that much.  Lastly are three tracks from two former members once again released under the White Plains name in 1978.  Strangely, two of these (“Dance With You” and “I Wanna Fall In Love With You”) have a 50‘s doo wop vibe to them, while “Plains” is a soft rock instrumental.  Completing the package is the aforementioned 28 page booklet that in addition to detailing the various band lineups includes plenty of pics of the band and memorabilia.   The Collection is an outstanding, very in-depth and well put together look into the diverse career of this band.

Posted by The Music Korner at 1:08 AM