While she has previously worked with the likes of Mike Stern,  Nouvelle Vague and Violent Femmes frontman Gordon Gano and was also half of The Bowdashes with Linn Holm, Neu Sierra marks Nana Nørgaard's debut solo project.  In between editing a new video she took a little time to answer some of my questions about the new EP, playing the autoharp and more. 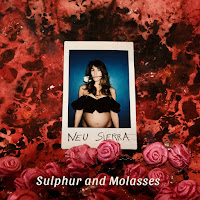 Prior to releasing Sulphur and Molasses you worked with a variety of big name musicians and also released an EP and album with Linn Holm as The Bowdashes. Can you give me a little background on yourself?  Also, what motivated you to do your own thing as Neu Sierra?

I was born and raised in Copenhagen, where I live today. Since I was 18 I’ve played in different bands, performing all over Copenhagen especially at Christiania venues. Together with Linn, who I later played with in The Bowdashes, I went to Paris to work with Marc Collin of the Nouvelle Vague. We slept in the office of his record label, woke up when the label staff met in the morning and after a tiny espresso we went down to the studio in the basement to work.

Back in Copenhagen I’ve joined different constellations - even jazz from time to time, and last year I released my debut single as Neu Sierra.

With everything else in life, I’ve acted very much alone. I’ve never been part of a big crew of friends, and I have no siblings. Doing my own thing is natural for me, but I’ve had fun and learned a lot working with Linn as The Bowdashes. I’ve always known that some day I would release something ‘as myself’, and the right time is apparently now.

You play the autoharp, which is definitely not something usually seen in a “rock” band, but I love the dynamic it gives your sound.  Can you tell me a little about what motivated you to think they would work together? 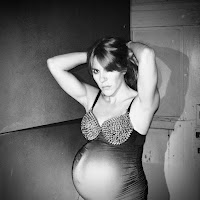 The autoharp itself has a big range sound wise - from fragile to grand, delicate to massive, and when I plug in my pedals, the spectrum widens. I like that you can express a lot with very little, which I guess is the deal with any instrument - the autoharp just seems to suit my temper pretty well. Sometimes I cut my fingers on the strings, or my warm fingers slide on a chord - then I’m suddenly not in charge of the harp anymore, and the sound coming from it is an awful surprise. But that’s also the fun of it. I guess I like the unpredictable..

Did the pandemic have any effect on the recording process for the EP?

Not really. My drummer had to record at home - but that worked so well, we continued working like that and I just got the most amazing drums sent from him.

Your music has a very dreamy, yet dark, cinematic quality to it, like something out of a David Lynch movie. Have you had any interest from anyone to use your music in movies or TV shows?

I get that a lot, which I take as a huge compliment! So thank you. The music hasn’t been featured in anything yet, but..

When you are writing songs is there a different mindset that you have when it’s for Neu Sierra as opposed to a different project like The Bowdashes?

Though I’ve always written ‘personal’ songs that spring from me, Neu Sierra is my very own, and I can do and say and sing whatever I want. I have the last word which feels very natural and a bit frightening at the same time, and at times I miss Linn (The Bowdashes) to just make a bloody decision, when I find it difficult.

I don’t work with rules or concepts - It’s all about the feelings, and it’s important to me that the music supports the lyrics and the other way around. If, let’s say a guitar plays something just to fill in, but really has no justification to the song, I won’t use it.

I read that you get compared to Nick Cave and Nico alot.  Every time I listened to the EP there were moments where it reminded me of something, but I just couldn’t put my finger on it.  Then I realized it was Johnette Napolitano, who was the vocalist for Concrete Blonde.  I think to me there is a vocal similarity between the two of you as well as a bit of the darkness to the music, although theirs had a little less noise and a little more pop. Have you heard that comparison before?

No, I have never heard that one, but I think it’s very funny and interesting to be compared to other artists. Of course I know and admire Nick Cave, but I don’t know his music well enough to really hear the similarities. On the other hand I do understand the Nico reference.

You’ve released some interesting videos for some of the tracks on the EP.  Were you involved with the concepts for those?

Very much yes. I made them myself.

You recently had a baby and I noticed in alot of the press photos and of course on the album cover you are proudly showing your pregnant stomach.  I love that you didn’t hide that and was curious if there was a conscious decision made to showcase your pregnancy with this EP? 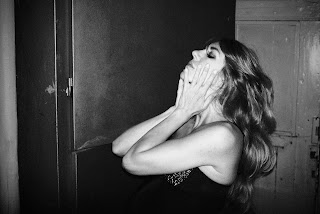 Not at all. I’m very bad at preparing, and the pregnancy was a surprise. A wonderful one, but it just happened to be at a moment, where I was busy doing everything for the first time as Neu Sierra. It wasn’t really possible to hide the pregnancy, and why should I? There’s always the chance a booker skips your name on the list, thinking it’s a risk booking a pregnant woman. I think playing concerts while pregnant is great - I’m not the biggest person, but with a big baby bump you can really claim your space on stage. And with the extra weight I felt pretty grounded too. Sure, I could get nauseous or dizzy, but that also happens after drinking too much wine or a long drive - and none of that would stop me from going on stage. I could have chosen just to use photos of my face, but this was how I looked at that specific moment in time. I think that’s worth immortalizing.

I saw a live video for the song “In My Garden”, which I really liked.  Do you think we will be hearing a studio version of that?

Not a question, but I also wanted to commend you on the band you have playing in the live videos I saw on YouTube. They were fantastic.

Thank you. I will let them know! I’m very excited about them too, and I feel very lucky to have them with me.

Now that the pandemic is hopefully slowing down what plans do you have for the near future?

Besides breastfeeding and changing diapers I have some concerts coming up in the new year and I’m going to release new music..