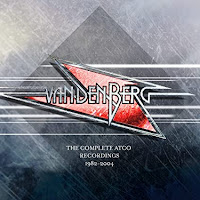 Vandenberg came to life in 1981 from the ashes of guitarist Adrian Vandenberg’s previous band Teaser.  They had released one album, but then after completely revamping the band’s lineup with all new members and getting a label deal they decided to change the band’s name to Vandenberg.  Over the next six years the band released three albums before vocalist Bert Heerik left the band and Vandenberg joined Whitesnake thus ending the band (Adrian did release a new album under the band name in 2020 with him being the only original member).  The four-disc box set The Complete Atco Recordings 1982-2004 collects together these original albums with a fourth disc of rarities and live tracks.

Even though it contains the biggest hit of their career in the hypnotic ballad “Burning Heart" (a song that hit 39 on the US charts) I feel their eponymous debut (disc one) is greatly underappreciated as it showcases an outstanding collection of bluesy hard rock highlighting Vandenberg’s virtuosity on guitar.  Standouts here include opener “Your Love Is In Vain” with it’s bluesy swagger and groove, “Back On My Feet”, “Wait”, a great rocker that also got some radio play and opens with an killer Spanish Guitar solo with some Eddie Van Halen flair, and the adrenaline fueled rockers “Ready For You” and “Out In The Streets”.

For their second album, Heading For A Storm, the band shifted a bit away from the bluesy hard rock sound and moved towards a bit more of a melodic 80‘s metal sound with the keys alot more present here than on the debut.  Having said that there is plenty of great guitar work and some definite highlights including the power ballad “Different Worlds”,  “Time Will Tell” and a couple of really strong straight ahead rockers “This Is War” and “Waiting For The Light” (this one definitely highlights the guitar work with a nice acoustic opening a some great shredding solos).  Overall this is a bit of a step down and a bit disappointing after such a great debut, but still worth the listen.

On Alibi, their final album of this era, the band pretty much went full force into melodic 80‘s metal.  While there are a handful of good straight-ahead rockers like “Voodoo”, “Dressed To Kill” and “Fighting Against The World”, they all sound a bit dated today.  Even the power ballads on this album, “Once In A Lifetime” and “How Long”, are a bit too much like all the other cliched, hair metal power ballads of that era. Having said all that the album does close out strongly with “Kamikaze”, an excellent instrumental that really allows everyone to shine.

The final disc of the box is a collection of rarities and live cuts.  First up are seven demos, five from the first two albums and two for tracks that were never released.  The demos of the album cuts are rawer and dirtier and the lack of studio polish give them a sound even heavier than the final versions (take a listen to “Ready For You” or “Out In The Streets”). As for the demos that never made it to an album as a finished track, both are good enough that they would have fit in perfectly on any album, but “Help Me Thru The Night” is especially strong, an absolutely beautiful power ballad that evolves into a rocker at the end with some outstanding guitar work that sounds great as a stripped down demo and makes you wonder why it was never finished and released. Next up are a couple songs in edited versions and a “special mix” of “Once In A Lifetime” along with six live cuts that show just how solid they were as a live act. Closing out the disc is the unplugged version of “Burning Heart”, a beautifully done version with some really nice string arrangements that was recorded in 2004 for a compilation disc. Completing the package is a booklet containing an interview with Vandenberg detailing the band's career.