Drawing from a very diverse array of influences, the French four-piece Smokeheads have recently released a very impressive debut EP entitled Never Prick My Pickles.  I recently had the chance to interview the band as we talked a little about their background, the EP, their future plans and more. 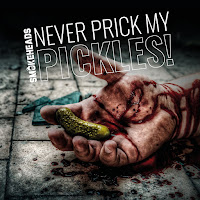 Can you give me little bit of a band history?

Philippe our drummer and David C, our lead guitar have known each other for years since they played together in several bands (Abyss, Miss Irma and HBS). Alain, our bass player, played in a band (LRM) in the same geographical area and he also played in the same AC/DC tribute band (Powerage) as Philippe.

As for David Z, he had been rehearsing in the next room for about ten years with his ex-band (Sinorma). When his band split up, the guys asked him to come and try out as a singer at first, then a friend of the band who was playing second guitar left for scheduling reasons and David Z took over the guitar at that time. That was in 2019.

I couldn’t find any songwriting information.  Do you write the songs as a group and how does the songwriting process tend to work?

There is no real writing process. When we started the group, the situation was "normal". David C and David Z, the two guitarists, would bring riffs to rehearsal and the goal was to play them together until something good came out. Just before the pandemic, we had started recording demos, then everything was stopped. We had to adapt like every band to a new style of work. The demos we had started were still there and thanks to them we could "fix" the structures and review what we didn't like. We had to start working on our own. Fortunately today the working tools are much more accessible in terms of ease of use. We were then able to see each other again during the deconfinements. The lock-down times helped us in some way, we had to anticipate what we wanted to record and prepare ourselves to be as efficient as possible. It was really a group work even if we were not physically together.

Today we can see each other again and we will surely start working together again, but we know that once we have found the structures and the atmospheres together, we will record them right away because in the end it was a very good technique for us.

Did the band produce the album or did you work with an outside producer?

The album was produced by the 5th member of the group, Yannick V. He and Philippe are old friends and Yannick has always been the manager, sound engineer, producer... in all the bands where they were together.

For our EP he was in charge of the technical aspect but he was also a real producer, he made us question ourselves at many moments and also pushed us to redo what was not useful for the songs. He is an essential element for the band, without him our first EP would surely not have had this quality. For the mixing and the mastering, we worked with Rob Carson, (CSS Studio in Chambéry). David Z had worked with him with his previous band. He totally understood our expectations.

Did you record the EP during the pandemic?  (If so, were you able to record as a group or did you have to record remotely?)

As I told you before, we started just before the pandemic. In France the first lock-down lasted 2 months and as soon as it was possible, we gathered in the house of our drummer to continue recording. We decided to do it in his house because our rehearsal studio was not open. We didn't want to do the final takes each in our corner, it was important for us to be together. So we did everything together but re-recorded anyway. The living room and the kitchen of our drummer became our recording studio in a way!

There are alot of interesting dynamics in your songs with shifting tempos and styles throughout every song.  Is that something you set out to do or did it just evolve that way?

When the band started, there wasn't really a guideline, a defined style or anything like that. We just knew it wasn't going to be Death Metal and it wasn't going to be Rock Blues. We had to " use " a lot of riffs in rehearsal so that at some point we could say together that it was good. In our band biography, we gave our different influences, Devin Townsend, Tool, Porcupine Tree, Mastodon, Toto, Gojira, but so many others. It's clear that we didn't want to do Classic Rock even though we love that too but I think we needed to challenge ourselves.

We don't start a new song by saying we want a change of tempo or mood at such and such measure, we make sure it serves the song according to our criteria of course. We can say that it is the song that takes us to where we need to go in a way.

I love the opening of the song “One Million Ways”.  Can you tell me a little about that? 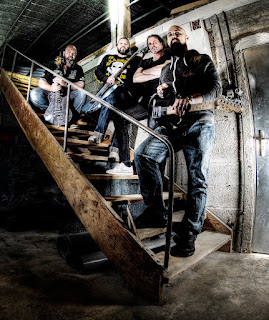 Thank you very much! This song is the first one we finished and especially the one we kept! The riffs were brought by David C (lead guitar). At first we had a "classy" intro, with drums but Philippe (drums) wanted to modernize it, so he took a lot of time to assemble samples together. When he came with it in rehearsal and made us listen to it, it was obvious that it would become the intro of the song. When David C was recording his guitars, he had the idea to add the slides and it was also obvious to us, it was not possible to go back! For the story all the text of the song was written by Philippe.

I don’t usually ask, but is there a story behind such an odd album title?

LOL!!! Yes there is a story, but it's complicated to explain and after that we would surely get a trip to a psychiatric hospital!!! All we can tell you is that we had a lot of laughs about the event that led to this title.

Do you have any plans yet for the next release?

We currently have 2 new songs recorded but for now the plan is to meet again in rehearsal to be able to play all the songs together and continue to work on new material. We haven't defined an exact plan, maybe we'll release a new EP or if the situation and the inspiration allow it why not an album.

We had our label (Wormholedeath Records) listen to the 2 new songs and they seem to like them, which is quite encouraging and motivates us to continue.

Have you been able to play live?

Unfortunately, we did not have the opportunity to play live for the moment. As I said before, one of our plans is to work hard so that if the situation allows it, we can play live in 2022.

Do any of you have any other projects?

No actually we are all 100% in Smokeheads. We all have busy family and professional lives, I think it would be complicated.

How is the metal scene in France?

Our EP, Never Prick my Pickles, is on streaming on all the usual platforms (Spotify, Amazon Music, Deezer...), it's possible to download it but also to buy the physical version on www.musicforthemassesdistro.com and on www.auralwebstore.com.