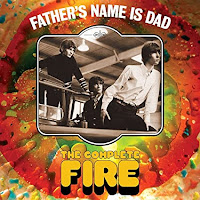 Before joining The Strawbs, Dave Lambert was the leader of Fire (originally known as Friday’s Chyld).  The three CD boxset Father´s Name Is Dad -The Complete Fire compiles all the known recordings of the band including singles, demos (most previously unreleased), their lone studio album The Magic Shoemaker and the live album from 2007 where the reunited band performed The Magic Shoemaker album along with a handful of other songs.

Disc one opens with the two cuts from their first single “Father’s Name Is Dad”, an infectious mod-era Who-like song (this song is so catchy that every time I hear it I find it running through my head for days) and “Treacle Toffee World”, which also brings to mind The Who a little, but with more of the quirkiness of a John Entwistle song.  At the time the single was released the band was signed to Apple Publishing and a month after it came out, Paul McCartney had it pulled so they could record a new version.  This fuller sounding new version is included as the last track on this disc.  Following the release of that single the band went back into the studio and recorded some demos that can also be found here and really show the diversity of what they were doing.  Among the highlights of these are “Happy Sound”, a tune with a bit of a jangly glam vibe, “Spare A Copper”, which was originally going to be their second single, “Will I Find Love”, a soulful tune that at times strangely sounds a little like Deep Purple’s “Hush”, the stripped down “It’s Just Love” and powerhouse “I Know You Inside Out”,  both of which do a great job at showcasing Lambert’s vocals, the ten plus minute multi-part rock mini rock opera “Alice In Wonderland”, “Green-Legged Auntie Sally”, an almost nine minute long blues rock jam with some outstanding guitar work, and covers of Moby Grape’s “Can’t Be So Bad”, which stays pretty close to the original and J.A. Freedman’s “Man In The Teapot”.  Also included on disc one are the four cuts recorded by the aforementioned pre-Fire band Friday’s Chyld and the tracks from the debacle that was their second single.  While the band had several really strong songs for this next single, Mike Berry, who was the head of Apple Publishing, rejected all of them and told them they needed to record a song he had written called “Round The Gum Tree”.  The whole band was opposed to this and refused to play on it, even though Lambert did reluctantly agree to contribute the vocals.  When they were told that the flipside would also be a non-Fire song (“Toothy Ruthie”), and was actually one written by Berry along with the band’s two managers John Turner and Derek Savage, the band refused to contribute at all, so Savage and Turner handled the vocals resulting in a song that was credited to the band, but actually had no band members on it.  Both these songs are nothing more than novelty songs and really have nothing in common with the rest of the band’s work

The second disc starts off with the band’s only studio album, The Magic Shoemaker, a song cycle of sorts about a cobbler and a pair of magic shoes.  The songs on the album are tied together with Lambert reading the story to a group of schoolchildren who were actually recorded at a birthday party.  Once again the diversity of the band is on display with highlights including the psychedelic tinged “Tell You A Story”, a tune that also has some prog elements, the extremely catchy pop sounds of “Magic Shoes”, which also has a bit of psychedelia and some excellent guitar work from Lambert, “Reason For Everything” and “Only A Dream”, a couple of songs that slow things down and show a more dramatic side to their sound, “Flies Like A Bird”, a straight-ahead rocker with some great garage rock guitars, “I Can See the Sky”, which again has a bit of a Who vibe and “Happy Man I Am”, a short little country jugband tune complete with banjo from Lambert’s future bandmate and Strawbs leader Dave Cousins.  In addition to the album cuts there are also 4 demos that were recorded for the album, including “Mama When Will I Understand”, a really strong blues tune with a powerful, very emotional vocal performance.  After the lack of success for the album, Lambert fired the whole band and then got a whole new group together to record the last two tracks here - the R&B flavored “Live to Live” and bluesy “Back There Again”.

Wrapping things up with disc three is the band’s live album The Magic Shoemaker Live!.  After getting together with the rest of the band for a Christmas meal at the end of 2006, Lambert told them that he had been thinking about doing a live performance of the album for a while and the rest of the band jumped on board.  Recorded in late 2007, the band sounds in fine form, almost like they had never been apart, making it a very fitting ending to the box set.  In addition to performing the album in it’s entirety they also sprinkled a few other songs into the set including great versions of “Father’s Name Is Dad" and “Treacle Toffee World" the two songs that really started it all, and a haunting reimagined version of “Mama When Will I Understand”.

Rouding out the box set is a great CD booklet with a comprehensive essay detailing the music and the band's history along with pictures and memorabilia.

Posted by The Music Korner at 2:08 AM