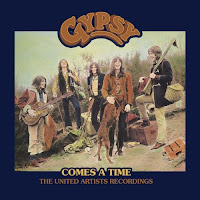 Initially forming as Legay in 1965 and releasing a really good psychedelic freakbeat single in 1968, this Leceister five-piece changed their name to Gypsy in 1969 and shifted musically towards a more West Coast rock sound releasing two albums for United Artists.  The new two CD set Comes A Time - The United Artists Recordings compiles newly remastered versions of both releases along with the two non-album tracks from their 1971 single.  The self-titled debut opens with a bang with “What Makes A Man A Man”, a straight-up rocker with a touch of an Allman Brothers vibe in the vocals.  They slow things down next with “Keep On Trying” and “I Don’t Care Do You Mind”, a couple of tracks that showcase their strong vocal harmonies (four of the five members contribute vocals) with a sound that often brings to mind Crosby, Stills and Nash (very evident on the latter).  The pace picks back up with “Turning Wheel”, an eight minute plus track that sounds very heavily influenced by Neil Young all the way down to the outstanding guitar jam, and is my favorite song here.  Some of the other highlights on the debut are the slow groove of ”Standing Alone Feel So Bad” and the somewhat laid-back rocker “Let Me Take You Home”, both of which showcase more excellent guitar work, and the Status Quo flavored boogie of “Pony Ride”.  Closing out the first disc are the tracks from the aforementioned single - “Changes Coming”, a hard charging tune that ended up being banned by the BBC for being too political, and “Don’t Cry On Me” a twangy, super infectious barnstorming country tune.

The second disc contains their sophomore release Brenda and the Rattlesnake, which was produced by John Anthony, who at that time had produced the likes of Genesis, Van der Graaf Generator and Lindisfarne, and had Ray Martinez replacing Rod Read on guitar.  Musically they at times moved a little more in the country and even Southern Rock direction and the production seems a little too polished and more often than not lacking the punch of the debut making it the weaker of the two, but overall still another really strong album. Highlights this time around include “Midnight Fighter”, a tune that’s almost a little too close to The Allman Brothers’ “Midnight Rider”, “Who’s Cheating”, which at times has a bit of a swampy CCR groove, the beautiful West Coast country of “Without You” complete with pedal steel, the boogie woogie groove of “Let’s Roll” with rollicking organ and horns and “Comes A Time”, another Neil Young like rocker.  Gypsy is another great band that never got their fair chance, but hopefully Comes A Time - The United Artists Recordings will give them more deserved recognition.

Posted by The Music Korner at 5:35 PM