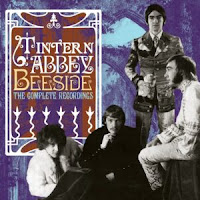 In 1967 British band Tintern Abbey released their debut single, which contained a couple of psychedelic gems in the swirling, early Pink Floyd reminiscent “Beeside” and the more uptempo “Vacuum Cleaner”, a tune that features some impressive drumming and a killer effects and feedback laden guitar solo.  Despite the single being far from successful, the band recorded a few more songs for the next single and had plans for a full-length release to follow, but unfortunately the planned single and album never saw the light of day. Over the years a few of these tracks have been released, including an EP with four songs from an 1968 acetate that was released in 2006, and a couple others that have popped up as compilation tracks, and ironically that single became much sought after and today sells for large sums of money.

Now, after over twenty years of research and transferring demos, masters and reel to reels, the full picture of Tintern Alley has been compiled into the outstanding two-disc collection Beeside - The Complete Recordings.  Collecting together everything the band is known to have recorded, Beeside is an absolute treasure trove of never before heard gems that show just how much potential this band had.  Alongside the infamous single and the cuts from the aforementioned EP, some of the highlights on disc one include  “Snowman”, a fantastic, yet bizarre musical soundscape full of haunting vocals and backwards masking that was considered for the next single, “Black Jack”, another early Pink Floyd flavored tune, “Tanya”, which shows a folkier side to the band, a feedback-heavy guitar instrumental “Bodmin Blow”, “Hookah”, a psychedelic rocker with some “Purple Haze”-like guitar work, the Arabic flavored “My Prayer” and “Busy Bee”, which was the original take of “Beeside” and has a sound more reminiscent of Love.

Over the course of their two year history the band had it’s share of disagreements and personnel changes (the essay in the 24 page CD booklet does a great job of covering the band history) and the second disc here, with the exception of a stellar second version of “Snowman”, is comprised of songs that were recorded in 1968 with the later version of the band.  While not quite as strong as the first disc, there are plenty of really great songs amongst the eighteen, all previously unreleased, tracks.  Some of the highlights on this disc include the bouncy, upbeat “Nightfall”, two versions of the poppier “Mrs Daisy”, which evolved from earlier song and almost single “How Do You Feel Today", “People Can’t See”, a slower tune with a bit of a Doors-like vibe, “My Zoo”, which sounds like it was influenced by the psychedelia coming out of San Francisco at that time, the straight-on psych rocker “My House” and a great second version of “My Prayer”.

With thirty-six songs (twenty-eight of which were previously unreleased) and the aforementioned CD booklet full of pics, memorabilia and a detailed essay, Beeside - The Complete Recordings is a wonderful, never before heard trip into the wonderful, yet short-lived, world of Tintern Abbey.

Posted by The Music Korner at 9:32 PM